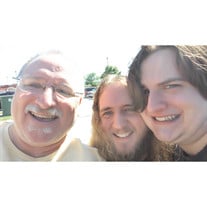 Funeral service for Benjamin Lawson "Ben" Roper, Jr., age 88, of Trinity, AL will be Tuesday, February 6, 2018, 2:00 p.m. with visitation three hours prior to service at Shelton Funeral Home Chapel with Pastor Jay Rhodes and Eddie Wooten officiating. Interment will be in Roselawn Cemetery. Mr. Roper was a Master Sergeant, and served in the USAF for 24 years. He was an era veteran of WWII, Korea, and Vietnam. He served 9 years overseas. Mr. Roper, who passed away Friday, February 2, 2018, at his residence, was born July 24, 1929, in Old Austinville in Morgan County to the late Benjamin J. Roper and Mae Woodall Roper. He was a member of South Decatur Church of God. He was a graduate of Austinville High School, the American River College of Sacramento, CA, and Nor Commissions Officers Academy, Albuquerque, NM. During his military career, he was awarded the Air Force Commendation medal for outstanding military service. He earned and was awarded 19 other awards and decorations. He loved God, his loving wife, Alice Wood Roper, children, 12 grandchildren, and 10 great-grandchildren. He had one son, Robert Roper of Iowa; two stepsons, Bobby Howell of Gulf Shores, AL and Donnie Howell of Flint City, AL; three daughters, Janet Emrico of Decatur, AL, and Cynette Thorn and Katrina Williams of Somerville, AL; two stepdaughters, Peggy Thorn of Hillsboro and Carolyn Hembree of Trinity. He was preceded in death by his parents, granddaughter Julie Moore, sisters Marvaline Roper Wagner and Mary Faye Roper, and one brother, Ennis Kenneth Roper. He is survived by his wife, Alice Wood Roper, son, stepsons, daughters, stepdaughters, 12 grandchildren, and 10 great-grandchildren. Pallbearers will be family and friends. He was a proud veteran and loved his country.

The family of Benjamin Lawson "Ben" Roper, Jr. created this Life Tributes page to make it easy to share your memories.