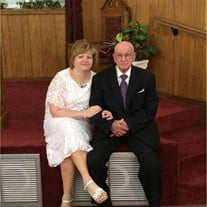 Funeral service for Charles Eddie Littrell, age 83, of Decatur, will be Sunday, July 15, 2018,  2:00 p.m. at Shelton Funeral Home Chapel with Eddie Littrell, Gary Patton, and Joe Corley officiating.  The family will receive friends on Saturday, July 14, 2018, from 6:00 p.m. until 8:00 p.m. at the funeral home.    Interment will be in Roselawn Cemetery. Mr. Littrell, who died Wednesday, July 11, 2018, at his residence, was born January 13, 1935, in Lawrence County, TN, to C. F. Littrell and Delcia Spann Littrell.  He was preceded in death by his parents, and one brother, Jimmy Littrell.  He served as an elder for many years, and a minister for 65 years, 30 of which were with Danville Road Church of Christ. He is survived by his loving wife, Bonnie Varvell Littrell of Decatur; two sons, Eddie Littrell (Anita) of Madison, and Charles Michael Littrell (Jana) of Athens; three daughters, Lana Schlabach (Calvin) of Mishawaka, IN, Sondra Farley (Anthony) of Trinity, and Cindy Dunlap (Jeremy) of Trinity; two brothers-in-law, Waylon Varvell and Billy Varvell, both of CA; 17 grandchildren; and 19 great-grandchildren.   Pallbearers will be grandsons.

The family of Charles Eddie Littrell created this Life Tributes page to make it easy to share your memories.

Send flowers to the Littrell family.