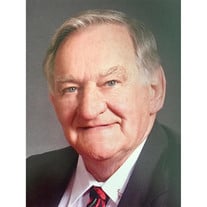 Funeral service for Eric Carlton "E. C." Terry, age 82, of Decatur, will be Tuesday, October 3, 2017,  11:00 a.m. at Shelton Funeral Home Chapel with Rev. Dr. Ben Hayes officiating.  The family will receive friends on Monday, October 2, 2017, from 5:00 p.m. until 7:00 p.m. at the funeral home.    Interment with Masonic Graveside Rites will be in Roselawn  Cemetery. Mr. Terry, who died Sunday, October 1, 2017, at his home, was born  October 29, 1934, in Courtland, to Eric and Velma Terry.  He was preceded in death by his first wife, Hazel Terry, his parents, and two sisters, Marie Terry McCollum and Ann Terry Carroll.  Mr. Terry was retired from Wolverine Tube, and was a member of Southside Baptist Church.  He was a member of Rising Sun Masonic Lodge #29, Cahaba Shrine of Huntsville, Decatur Shrine Club where he was a Past President, and the Courtland Masonic Lodge where he was a Past Master of the Lodge. He is survived by his wife, Brenda Bolding Terry of Decatur; one son, Kevin Terry of Decatur; one daughter, Debbie Terry Roberts of Jonesboro, AR; five grandchildren; two great-grandchildren; and several nephews and nieces. Pallbearers will be members of the Masonic Lodge.  Honorary pallbearers will be grandsons, Ben Roberts of Bentonville, AR, Justin Terry of Decatur, Ian Terry of Chicago, IL, and Jesse Dotson of Hartselle. In lieu of flowers, the family respectfully requests memorial donations be made to Shriners Hospitals for Children, Transportation Division, 2900 Rocky Point Drive, Tampa, FL 33607.

The family of Eric Carlton "E. C." Terry created this Life Tributes page to make it easy to share your memories.

Send flowers to the Terry family.