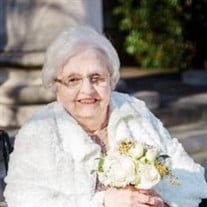 Martha Magnusson Wales, who spent most of her life in Decatur, Alabama, went home to be with the Lord on February 4, 2022 in Homewood, Alabama at the age of 84. Funeral service will be Tuesday, February 8, 2022, 11 a.m. at Shelton Funeral Home. The family will receive friends for one hour prior to the service. Interment will immediately follow the service at Gatlin Cemetery in Ardmore, Alabama. Martha was preceded in death by her husband of 57 years Wayne Wales; her parents George and Sarah Magnusson; and her brother Clifton Magnusson. Martha is survived by her son Kevin Wales and his wife Michelle of Homewood, Alabama; granddaughter Sarah Wales Storey and her husband Will of Hoover, Alabama; and her grandson Harris Wales of Homewood, Alabama. Martha was born in October 1937 in Ardmore, Alabama. She graduated from Ardmore High School and received her teaching degree from Athens College. She married her high school sweetheart Wayne, who took her on their first date to a drag race unbeknownst to her mother. She and Wayne moved to Decatur, Alabama, where she taught English and typing at Priceville High School until the birth of her son Kevin. She remained an active member of Kappa Kappa Iota, a teaching sorority, and continued many life-long friendships she made teaching. Martha loved serving the Lord at First Baptist Church of Decatur, where she was a member for over 50 years, until she and Wayne moved to Homewood, Alabama to be closer to their son and his family. She loved her Sunday School Class and was always active in Bible Studies at the Church. She served her community through Meals on Wheels and other Church outreach functions. She enjoyed playing the piano and spending time with her extended family. Her pride and joy were her grandchildren, Sarah and Harris. From making them her delicious dumplings and banana bread, giving them mini ice cream cones every night, taking them to Panera bread and Steak-n-Shake , playing with them at her parents’ farmhouse, and taking them to Gatlinburg for foot-long corndogs and Disney World, she was the best Nana any grandchild could ever have. She was a beloved mother, Nana, and friend to so many. She leaves behind a legacy of faith in the Lord that will live on for generations to come. In lieu of flowers, the family respectfully requests donations to the First Baptist Church of Decatur.

Martha Magnusson Wales, who spent most of her life in Decatur, Alabama, went home to be with the Lord on February 4, 2022 in Homewood, Alabama at the age of 84. Funeral service will be Tuesday, February 8, 2022, 11 a.m. at Shelton Funeral Home.... View Obituary & Service Information

The family of Martha Magnusson Wales created this Life Tributes page to make it easy to share your memories.

Martha Magnusson Wales, who spent most of her life in Decatur,...

Send flowers to the Wales family.