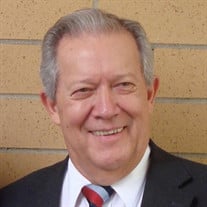 On Friday, January 28, 2022, God summoned Ralph Emerson Matthews to "Come home." His family friends shall greatly miss him. During his 84 years of life, he served in many roles. Notably, he was an owner and president of Matthews Industries, Ropak Manufacturing, and National Packaging. To his alma mater (Bob Jones University, Greenville, SC) and the organizations he served, he was a trusted advisor and confidante. To decades of church friends he was a song leader, deacon, teacher, and friend. To his family he was Granddaddy, Grandpa, Papaw, Daddy, Dad, father, and husband. To all, he was an example of faithfulness: in his marriage, in his home, in church, and in business. He was born the youngest of four sons on October 16, 1937, to Arthur Madison Matthews and Nancy Mildred (Compton) Matthews. He met his future bride, Anne Elizabeth Dietz, at church when he was 13 and she was 11. Their courtship flourished years later and they wed on August 21, 1959. Together they raised four children, have 21 grandchildren, and eight great-grandchildren. He was preceded in death by his parents, his two eldest brothers, his only daughter, Judith Ann (Matthews) Grant, and one granddaughter, Charity Leigh Matthews. He is survived by Anne, his wife of 62 years, and their sons, Tim (Cynde), Paul (Aimee), and Joel (Sarah), all of Decatur. Their 20 grandchildren: Drew and Jessie Matthews (children, Aaron, Emma, and Ian), Jana and Anthony Rogers, Holly and Donald Helman, Jonathan Grant, Christen Grant, Scott and Megan Matthews (child, Everly), Carol Anne and Mitchell Beck (children, Asa and Selah), Meg and Stephen Wess (children, Caryn and Tommy), Anna Grant, William and Cindy Matthews, Kalista and Ben Moore, Charlotte and Blake Felber, Karis and Nathan Herbster, Abigail and Christian Sides, Elizabeth Matthews, Erin Matthews, Caleb Matthews, and Nathan Matthews. A visitation and memorial service will be held at Shelton Funeral Home, 2105 Beltline Road, S.W., Decatur, AL 35601 on Saturday, February 5, 2022. The visitation will be held from 10:00 a.m. until 11:00 a.m. with the memorial service immediately following at 11:00 a.m. Interment will follow in Decatur City Cemetery. In lieu of flowers, the family respectfully requests memorial donations be made to one of the following: the Matthews Scholarship at Bob Jones University in Greenville, SC; the Mission Fund of Faith Baptist Church of Decatur, AL; or to your favorite missionary or ministry.

On Friday, January 28, 2022, God summoned Ralph Emerson Matthews to "Come home." His family friends shall greatly miss him. During his 84 years of life, he served in many roles. Notably, he was an owner and president of Matthews Industries,... View Obituary & Service Information

The family of Ralph Emerson Matthews created this Life Tributes page to make it easy to share your memories.

Send flowers to the Matthews family.