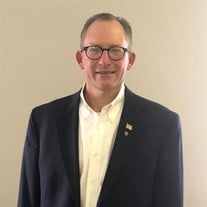 Dr. Samuel Todd Evans was welcomed into the presence of his Savior and Lord on Thursday, April 7, 2022, at Flowers Hospital in Dothan, Alabama. Todd was born June 10, 1964, in Memphis, Tennessee. When he was five, his family moved to Hamilton, Alabama, where he grew up and graduated from Hamilton High School in 1982. He served his country in the Air National Guard from 1982-1991. Todd attended Samford University in Birmingham, Alabama, and graduated in 1987 with a degree in Religion and English. He then enrolled in New Orleans Baptist Theological Seminary where he earned his Master of Divinity in 1990 with a focus on Biblical Studies and Preaching. He later earned his Doctor of Ministry degree in 1997 from the Beeson Divinity School of Samford University. Todd was the pastor of Corinth Heights Baptist Church in Haleyville, Alabama, from 1990-1997. In 1992, Todd met Meia Defoor while preaching a revival service. They were married February 25, 1995. He was the pastor of Parkview Baptist Church for twenty years (1997-2018). Todd became the pastor of First Baptist Church, Abbeville, Alabama, in February of 2021. Todd served the Lord and these churches with faithfulness, love, and a heart for excellence. Todd is survived by many friends and family who loved him dearly. Aside from preaching the gospel, Todd’s greatest joy was caring for his family. He was a faithful, devoted husband and father to his loving wife, Meia, of 27 years, and five children: Sam, Ellie, Hugh, Betsy, and Henry. He was a beloved son-in-law to Donnie and Violette Defoor and brother-in-law to Heather (Matt) Hyde, and uncle to Lou Jackson Hyde. Todd was preceded in death by his parents (Samuel and Lucille). He is also survived by his sister Dee (Mike) Noe of Hamilton, Alabama, and niece Maddie and nephew Nathan. A memorial service will be held at First Baptist Church, Abbeville, Alabama, at 10:00 AM on Saturday, April 9, 2022, with visitation at 9:00 AM. Visitation will be at Shelton Funeral Home in Decatur, Alabama, from 7:00 – 9:00 PM on Saturday, April 9, 2022. A Celebration of Life will be held at Parkview Baptist Church, Decatur, at 2:00 PM on Sunday, April 10, 2022. Burial will be in Decatur City Cemetery

Dr. Samuel Todd Evans was welcomed into the presence of his Savior and Lord on Thursday, April 7, 2022, at Flowers Hospital in Dothan, Alabama. Todd was born June 10, 1964, in Memphis, Tennessee. When he was five, his family moved to Hamilton,... View Obituary & Service Information

The family of Dr. Samuel Todd Evans created this Life Tributes page to make it easy to share your memories.

Dr. Samuel Todd Evans was welcomed into the presence of his Savior...

Send flowers to the Evans family.