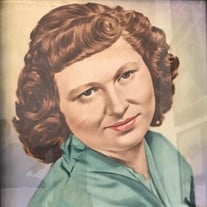 Funeral service for Wilma Imogene Terrell Morgan, age 89, of Decatur, will be Monday, January 24, 2022, 2:00 p.m. at Shelton Funeral Home Chapel. The family will receive friends for two hours prior to service at the funeral home. Interment will be in what was formerly Upton Chapel now known as Liberty Community Cemetery. Wilma, who died Friday, January 21, 2022, at River City Center, was born July 25, 1932, in Danville, AL, to Herbert Howard Terrell and Bertie Mae White. She was preceded in death by her parents; one son, Randal Morgan; two brothers, Calvin Terrell, and Howard Terrell; and one sister, Nell Brown. She is survived by her loving husband of 71 years, James Morgan of Decatur; one son, Ricky Morgan of Decatur; two daughters, Kim Glasgow Tapscott (Steve) of Decatur, and Kathy Hughes (Dewey) of Decatur; five grandchildren, Jason Morgan of Decatur, Cameron Glasgow of Decatur, Stephanie Russell (Martin) of Huntsville, Jessica Morgan of Hartselle, and Caitlin Glasgow Seahorn (Jordan) of Trinity; five great-grandchildren, McKaylyn Morgan, Isla Russell, Alex Wahoski, Avery Seahorn, and Layton Seahorn; one sister, Katherine Burns of Michigan; and one sister-in-law, Ginny Terrell of Danville. Wilma's greatest joys in her life were her grandchildren and great-grandchildren. She nurtured them and showed them what it was like to be loved. She would spend evenings after school watching the Golden Girls with them or helping with homework. Wilma also loved her Boston Terriers who were almost like children to her. Pallbearers will be Cameron Glasgow, Martin Russell, Jordan Seahorn, Dale Terrell, Roy Tapscott, and Jason Morgan.

Funeral service for Wilma Imogene Terrell Morgan, age 89, of Decatur, will be Monday, January 24, 2022, 2:00 p.m. at Shelton Funeral Home Chapel. The family will receive friends for two hours prior to service at the funeral home. Interment... View Obituary & Service Information

The family of Wilma Imogene Morgan created this Life Tributes page to make it easy to share your memories.

Send flowers to the Morgan family.